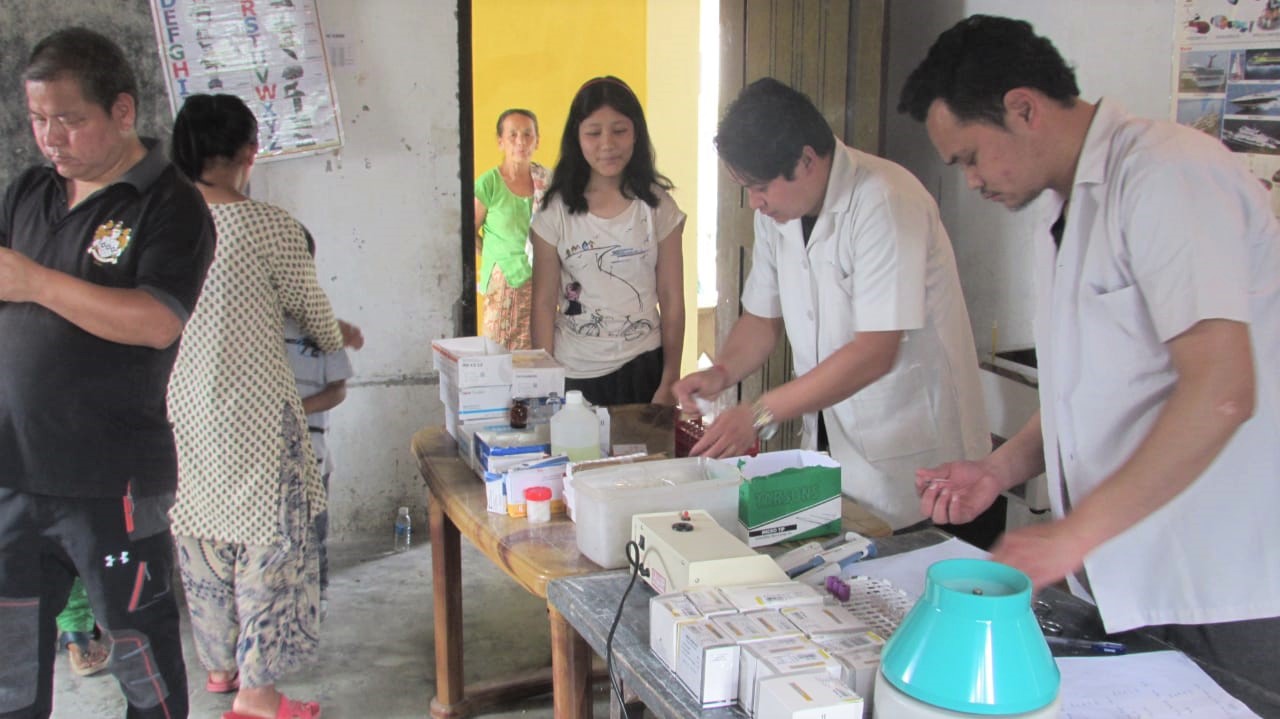 The day started with registration of local residents visiting the camp, where a team of three doctors – Dr. Plaban Das, Dr. Yasmine Tamang, Dr. S. Bag, a Physiotherapist, Mr. Vishal Yonzone – and a crew of staff nurses and lab technicians were stationed. The attendees were examined by the doctors, who then suggested any follow up tests required or arrangements were made for free medicines. 115 people were registered and examined. Medical tests included Lipid Profile, Blood Glucose Tests, Uric Acid Tests and R.A Factor Tests. A total of 13 ECG (Electrocardiography) tests were done on location. Reports of the medical tests were handed out later in the afternoon with doctor consultation. Prabitra Subba, aged 84, was the oldest among those attending the camp on Sunday. Chandra Bahadur Chettri, 82, thanked the doctor and the entire team for arranging the camp and for bringing the mobile laboratory to the area. The camp was assisted by village volunteers mobilized by SOGG learning Centre Pudung along with our GFF team.  GFF helped to provide free medicine for the patients and provided lunch & tea for the volunteers and the medical team.

Health Camp are one of our main activities conducted in partnership with various organizations like Rotary Club, Lions Club, Red Cross, local eye hospitals and other medical institutions. With the help of  Sir Owen & GFF we have been able to organize more than 40 Health Camps in the region of Darjeeling & Kalimpong hills.

The SOGG Learning Centers which started in the year 2014 were inspired and supported by Sir Owen Glenn. These Learning Centers’ main aim is to prevent children from dropping out of school and becoming child labourers. Our Learning Centers help by providing free tuition after school to village children, because many village children do not have the right kind of environment to study at home. The Learning Centres also help previous dropouts to return to education and eventually get better jobs. Our Centers are located in three villages namely Chibbo, Bong & Pudung. These villages were part of GFF’s first Village Development project (2007-2013) where GFF implemented health, water, sanitation and education projects.  Besides the regular free tutorials, we also organize various forms of awareness programs (health & hygiene, environment, human trafficking, agriculture, horticulture, floriculture, etc.) among villagers. We also teach sports, music and culture preservation and help youth get connected to vocational studies opportunities in order to get a proper employment.